If you don’t let us get married then you’re DISCRIMINATING against us. This is basically the same as racism, and you’re treating us like second-class citizens, inferior human beings. This is one of The Worst Crimes.

To discriminate: make an unjust or prejudicial distinction in the treatment of different categories of people, especially on the grounds of race, sex, or age. 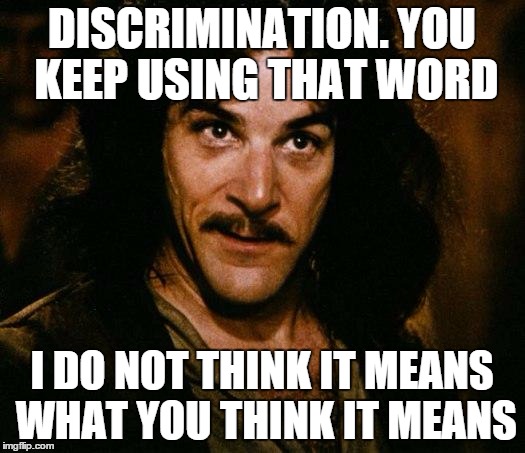 Yes, we are discriminating in this instance, what of it? Let’s revisit the definition:

To discriminate: to recognize a distinction; differentiate.

Somehow, the negative meaning of discrimination has become conflated with the neutral one. Somehow, even any reasonable distinctions can be classed as “unjust or prejudicial distinctions in the treatment of different categories of people”.

Now, it is certainly possible that there is no significant difference between heterosexual and homosexual relationships, and that treating them differently is therefore an example of an unjust distinction. However, those who shout “Discrimination!” are not just positing the possibility.

The mere fact that people are suggesting that there might be a difference between relationships between two people of the same sex and between a man and a woman is enough to warrant this cry of prejudice.

Instead of seeing rational debate around whether this is a case of a just or an unjust distinction, we are seeing people outrage at the mere fact that a distinction is even being made. This is not a good place to be.

I have been brought out of a long hiatus by the desire to have some way of railing against the overwhelming feeling of helplessness in the face of the widespread embrace of pro-SSM arguments, as well as to clarify my own thoughts.

To start off with, I’m going to rant for a bit about the fact that the different camps use the same words, though in different ways, and this has contributed to some confusion.

First word up for discussion: equality. 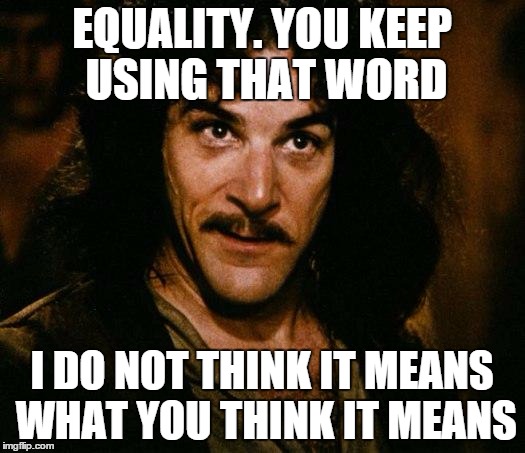 The general gist of many people’s arguments runs thusly:

This often gets to reduced to simply stating that “everyone is equal”, or “everyone has equal rights”.

Anyone who thinks about that last statement for half a second realises that this is obviously false. However, because it’s left unspecified, people fill in the blank with whatever their vague notion of equality is.

Thus, instead of the sophisticated debate this issue deserves, we are left with people asserting merely “But Equality! It’s good!” And well-meaning folk feeling there is no other option but to agree. “Well yes, I actually can’t see anything wrong with that statement… I guess I’m joining their team.”

These would agree that equality under the law is important, and should be respected. The problem arises when we consider in what way are human beings actually equal?

I would suggest that the only sensible claim to make is that we are equal in dignity, as human persons, in light of our possessing an intellect and will, giving rise to our capacity to reason, discern the good, and to make choices based upon this discernment.

It is in the interests of the preservation of the inherent dignity of every human being that the notion of fundamental human rights comes into play. I’ll go into these in more depth later, but essentially, we have the right only to those things which uphold our dignity as human persons. For example, we have the right to having our basic needs for survival being met, but we do not universally have the right to a sumptuous feast for every meal.

*NB: I refrain from using “traditional marriage” because it caters to the idea that there are two equally valid ways of understanding marriage, whereas I think that same-sex ‘marriage’ is an impossibility, hence the inverted commas, and the so-called “traditional” kind is the only kind of marriage.

From my teaching blog:

Musings on how one ought to approach the teaching of Religion in Catholic Schools will be frequent on this blog, as it is a particular interest of mine. Today I would like to point out what I think has been a major flaw in the entire history of RE in Australia: getting the focus wrong.

Essentially, there have been a number of pedagogical shifts over the last century or so, with respect to the consensus on how the Catholic Faith is best handed on to students. At the turn of the century, a doctrinal approach dominated, in which the focus was to make sure children had memorised all the doctrines of the Church. In reaction to this, the so-called kerygmatic approach was developed, which emphasised one’s personal, subjective experience of the Gospel, often without regard for what the Church actually taught. This in turn gave way to the life-centred approach, which…

I WANT THIS SHIRT.

[As I am still recovering from an intensive retreat I recently gave, I am thin on words. But here’s a fun and fleeting thought for today.]

As I once collapsed under the weight of advanced calculus in college, this Blog post title strikes terror in my soul.

I used to have a t-shirt back in college (that I took off on the spot and gave to a complete stranger who said she thought it was ‘so cool’ — something you do when you’re an undergrad) that had this on the back: I wish I had it again.

I recall my physics professor in a lecture back in 1988 at Florida State said,

If there is a God, his first language is math.

Thank God my own theological work does not require this language, though if I were a real theologian like Augustine, I would be more committed to learning:

I came across a superb quote from Chesterton regarding virtue the other day, in Christopher West’s At the Heart of the Gospel- Reclaiming the body for the New Evangelisation. (Which is knocking my socks off, by the way.) I sought the original essay in which it appeared, and found some other things I rather liked. The highlights I reproduce below:

END_OF_DOCUMENT_TOKEN_TO_BE_REPLACED

I began some time ago to write up a tentative theology of books, bookish theonerd that I am. I hit a rut, however, because things weren’t satisfactorily coming together for me. The post was sparked by a debate I had with someone over whether real books were superior to e-books, but I realised that my dislike of e-books had less to do with e-books themselves, than with the broader question of the place of technology in the lives of human beings, and my intensely realist philosophical outlook. Hence, it is these thoughts that I will present to you today, before I narrow in on books specifically.

END_OF_DOCUMENT_TOKEN_TO_BE_REPLACED

Strange Notions (the place to be online for Catholic-Atheist dialogue) is running a super series on how Catholics approach Sacred Scripture. I’ve written on this briefly before, but if you want more detail but not a whole book, Mark Shea is your man.  END_OF_DOCUMENT_TOKEN_TO_BE_REPLACED

For your amusement this Friday morning, I present this clever comic [a man who uses a puppet called “Randy” to great effect] on queue rage. We’ve all been there. Don’t deny it.  END_OF_DOCUMENT_TOKEN_TO_BE_REPLACED

Hellooooo, my dearest readers!!! I have missed the blogging world very much. We have just finished moving house, and moving eight people’s worth of stuff in two weeks is no mean feat, let me tell you. However, exhausted as I am, we are home, and I am once again at leisure to write down a thought or two.

First of all, I must share with you this gem from Neal Obstat. It is one of the most beautiful encapsulations of seeking holiness in everyday life, the very heart and soul of what Opus Dei is all about. END_OF_DOCUMENT_TOKEN_TO_BE_REPLACED

Three questions on the Reformation and its purpose. If you’re Protestant, you qualify to answer them. So please go do so!

Toward The Future City

Dream Big | Challenge Yourself | Inspire Others

Meditations and mutterings from a Catholic priest

Striving for holiness with a Catholic heart.

The True Dignity of Women

all things Catholic and Family, nurturing souls to holiness.

This site is all about Love and Courtship

On the subject of Same Sex Attraction

The thoughts and experiences of a new grad teacher

GETTING THROUGH LIFE KICKING & SCREAMING

Bloggity of my inner thoughts.

Let's make this a thing together.

Helping families to learn and enjoy math together.

Declare love in the morning and truth in the night!

The Personal Website of Catholic Apologist and Speaker Trent Horn

A young Catholic woman, writer, and wife sharing the joys of living her vocation in the spirit of Proverbs 31: 10-31.

Writer, Screenwriter, Journalist, with an Interest in Adoption

My Site
Spiritbath
Blinding Light By Which We See

A guy and his camera capturing the colours of Paris.

Set your mind on the things above

Author of Soulful Journey: Walking With Faith After My Near-Death Experience

The Veil of Chastity

Wisdom and Hope For Single Girls!

The Spiritual Evolution of a Faulty Catholic